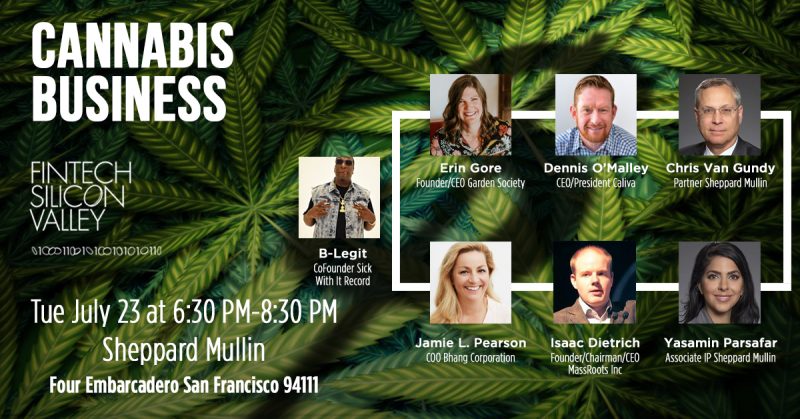 The estimated reading time for this post is 0 seconds

The estimated reading time for this post is 312 seconds

Erin Gore Founder/CEO Garden Society, a California-based, cannabis-focused benefit corporation serving women in search of new, more holistic ways to rejuvenate from the rigors of their daily lives. Garden Society offers high quality, low dose artisanal confections and sun-grown pre-rolls that connect biodynamic farming, sustainable ingredients and strain-specific cannabis in a variety of products. Erin is an active member of the Northern California cannabis community, and frequently speaks on the topics of cannabis and entrepreneurship. She’s a fearless advocate for women-owned cannabis businesses, and equally dedicated to breaking the stigma and rewriting the script around the plant. With a degree in Chemical and Biological Engineering from the University of Wisconsin-Madison, Erin is also fluent in the science-based talk of cannabis and production.

Jamie L. Pearson, COO Bhang Corporation Jamie is responsible for the overall vision and direction of the company on a global scale and its entrée into international distribution and capital markets. The daughter of a cannabis cultivator, she literally grew up in the industry and has watched it evolve from Reagan’s war on drugs to where it is now. In her professional life before Bhang, Jamie founded and oversaw the day-to-day leadership, general management and operations for a successful real estate investment, finance, and management firm. Jamie currently owns a real estate portfolio that spans three countries. In 2015, she co-founded a celebrity cannabis agency, working with iconic artists such as Cypress Hill and Die Antwoord to initiate ventures with brands like Bhang and Natural Cannabis. She has personally owned cultivation operations in Northern California and Montana and has been a cannabis-friendly landlord for over 15 years. At Bhang, she is in charge of all areas of operations including corporate management, strategic planning, banking and finance, global licensee & vendor relationships, supply chain, customer service, hiring and personnel oversight. A certified team builder, published author and popular speaker in both the cannabis and real estate industries, Jamie’s “best-of-both-worlds” experience is not only unique and unmatched, it provides a breadth of knowledge that appeals to newcomers and veterans alike. Selected as one of High Times Most Influential Women of Weed 2018, she is described as “… a widely recognized win/win deal-making ninja, and leader of all negotiations for global joint ventures and licensing deals for Bhang—the world’s most-awarded and distributed cannabis house of brands featuring the eight-time Cannabis Cup winning line of gourmet chocolate bars and an award-winning line of CBD products.” Jamie studied German at the University of Wuppertal (Wuppertal, Germany), has a B.A. from Vassar College and a Masters in Leadership from the University of Oregon. She is on the advisory board of Liberty Leaf Holdings (CSE:LIB) and The Original Jack Herer Group.

Isaac Dietrich. Founder/Chairman/CEO MassRoots Inc In his various positions, he is responsible for executing MassRoots’ strategic business development. He was the co-founder and majority shareholder of RoboCent.com from June 2012 until his buyout in December 2016. From February 2010 to December 2010, Mr. Dietrich served as Field Director for former Congressman E. Scott Rigell’s campaign.

Joe Sequenzia CMO Caliva has pursued his passion for strategic positioning and brand building excellence for Pepsi, Nike, Starbucks, RJ Reynolds, Coca-Cola, Fox, McDonalds, American Express, MasterCard, Porsche, Virgin Megastores and ABC Networks to name a few. He has worked in M&A for IPG, run an Agency of the Year, worked in creative and brand planning at Grey, led the creative vision for DraftFCB Worldwide and more. But he is most passionate about the dynamic, creatively-fueled innovative spirit that defines Caliva. He attended Parsons School of Design, collects guitars, cars and sneakers -and loves all documentaries.

B-Legit CoFounder Sick With It Records along with E40. Brandt Jones is a Bay Area rap icon better known to many as B-Legit. B Legit debuted in the early ’90s with a hardcore style that he’d carry through decades of solo releases, collaborative efforts, and mixtapes. After attending Grambling State University, where he studied Computer Science he joined “The Click” a hip-hop group that also featured his cousins E40, Suga-T, and D-Shot. The quartet scattered three studio albums across the ’90s and early 2000s. Game Related, the second of the trio, placed the Vallejo, California-based group just outside the Top 20 of the Billboard 200 in 1995, the same year B Legit — along with E40 and D Shot — appeared on 2 Pac’s “Ain’t Hard 2 Find.” B-Legit’s s solo career began in earnest while The Click were active. By the end of the ’90s, he had three solo albums to his credit, highlighted by Hemp Music (1996), on which he was joined by the likes of E40, Suga-T, Celly Cel, Kurupt from Deathrow Records and even soft rock legend Daryl Hall. In 2018, B-Legit and E40 reunited and released “Connected and Respected. The rap veteran is a also a tech enthusiast who now has his eyes set on Silicon Valley to disrupt the music industry.

Moderator: Yasamin Parsafar Associate IP Sheppard Mullin Yasamin is based in the firm’s San Francisco office and is Lead Associate of the firm’s Blockchain Technology & Digital Currency team and a member of the Cannabis and esports teams. Yasamin’s practice focuses on protecting her clients’ intellectual property rights through counseling, prosecution, enforcement and litigation.